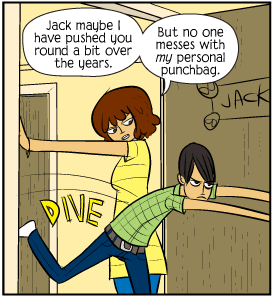 A subtrope of Aw, Look! They Really Do Love Each Other, and/or Friendship Moment, in which a character who frequently bullies or teases another is the first to stand up for them if they get the same treatment from anyone else. The time-honored cliche is "You can't do that to them. Only I can do that to them!"

For example, Alice and Bob are going out, and Alice never misses a chance to call Bob a jackass. Then, one day, Bob screws up big time in front of Charlie, who calls Bob a jackass. Cue Unstoppable Rage from Alice.

May include an impassioned speech on what Alice will do to Charlie if he ever dares disrespect Bob again... before the payoff that it's not because she doesn't want Bob to be abused, it's because doing so is her job, dammit!

This dynamic can exist in all sorts of relationships, from couples to friends to, perhaps most commonly, siblings (combining Sibling Rivalry with Big Brother Instinct), or the unpopular but tolerated member of a group.

Frequently a sign of Belligerent Sexual Tension, Vitriolic Best Buds, Tsundere, or Moral Myopia. Often a Jerk with a Heart of Gold trait. Compare The Only One Allowed to Defeat You, where a character's enemy will come to his or her defense if anyone else attacks him/her.

Cady innocently repeats this to the Plastics, then follows it up by thinking "Uh-oh. Maybe it's only okay when Janis says that." And then later:
Damian: [outraged] Too gay to function?
Janis: It's only okay when I say that!

Alternative Title(s): The Only One Allowed To Insult You