Recap / My Little Pony: Friendship Is Magic S7 E19 "To Change a Changeling" 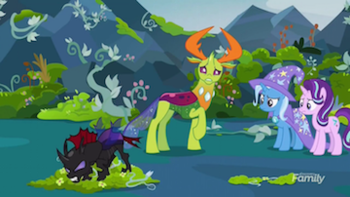 A changeling CAN change, but that doesn't necessarily mean he wants to.
Starlight Glimmer: I thought Ember helped you get more assertive so you could deal with all the renegade changelings who didn't wanna change.
Thorax: Oh, she did. Really helpful. I was able to convince all of them to change, except one of them... My brother.
Written by Kevin Lappin
Advertisement:

After receiving more letters from Thorax about issues with Pharynx, Thorax's elder broodmate, Starlight Glimmer takes Trixie to the Changeling kingdom, which has blossomed with plant life since the changelings are no longer drawing love from it. Outside of the hive, they run into Pharynx, who has not yet chosen to take on the new colorful changeling forms, and instead captures the pair. He takes them to Thorax, but Thorax reprimands him. Thorax explains to the ponies that Pharynx used to be the lead guard, helping to protect the hive, but since their transformation, has had little do to and resents the changes that has happened. The only thing that seems to keep Pharnyx interested is the current threat of a giant maulwurf that threatens the hive, but Thorax has planned to lead the creature away via a trail of food.

After showing Starlight and Trixie around the hive, he invites them to join their "feelings forum", one of the changes he implemented to help the reformed changelings express their feelings. It becomes quickly clear that most of the other changelings despise Pharynx since his foul mood gets in the way of enjoying things, but Pharynx overhears this, and continues to express his dislike of what the hive has become. Starlight and Trixie try to appeal to Pharynx's bad side by explaining how they had their own quarrels with the other ponies but since have come around, but Pharynx dismisses this. The ponies think that the only solution is to have Thorax kick Pharynx out of the hive, but when they go to talk to him, they learn from Thorax that ever since they were young, Pharynx had protected Thorax, even if it was to tease and bully him more. Starlight gets an idea to appeal to this side of Pharynx, and has Trixie go locate him while she reverses the trail for the maulwurf to lead back to the hive.

As they wait for the maulwurf to arrive, Trixie reveals she couldn't find Pharynx, as he had already left the hive, and now Starlight's plan will lead the maulwurf right to them. Thorax makes the ponies come with him to find Pharynx since they screwed up the situation, and Starlight tries to encourage the other changelings to come with them, but none of them seem to want to come. The three search outside the hive, and find Pharynx trying to fend off the maulwurf with little luck. They join in but they are too weak to help. As they are fighting, many of the other changelings arrive, having come around to Starlight's encouragement, and help to weaken the maulwurf, though it remains too powerful. Pharynx gets an idea, reminding Thorax of how he teased him in the past, and together they get the maulwurf to beat itself up, eventually forcing the creature to retreat.

As the other changelings celebrate, Thorax thanks Pharynx for his help, which he says is only because he loves the hive. The other changelings apologize for treating Pharynx as they had and welcome him back. Accepting their apologies, Pharynx suddenly transforms and becomes a reformed changeling, agreeing to return to help protect the hive. Starlight and Trixie apologize for making things worse, but agree with Thorax that it has all worked out for the best.