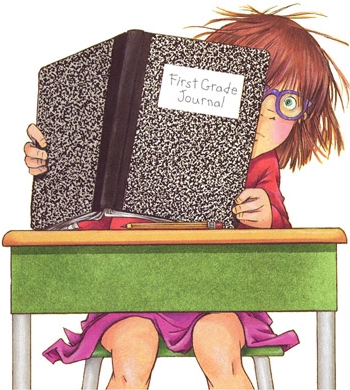 My name is Junie B. Jones, and this is my VERY OWN ACTUAL PAGE on TV Tropes!
Advertisement:

Junie B. Jones is a series of books aimed at elementary school audiences, written by Barbara Park. The "B." stands for "Beatrice," but she doesn't like Beatrice, she just likes B., and that's all. The stories are told in the first person by Junie B. herself, and all of the stories in the original series also include a brief letter at the end by Barbara Park, with illustrations by Denise Brunkus.

Junie B. was originally conceived as a character that was Not Allowed to Grow Up, but Barbara Park changed her mind on this matter and "graduated" Junie B. to first grade, with the latter books in the series released under the banner "Junie B., First Grader." There were a total of 27 books in the series, 17 in the original line and 10 in the "Junie B., First Grader" series, as well as a couple of supplementary titles. These were released approximately once a year until 2007.

No new releases were seen after Junie B., First Grader: Dumb Bunny, and it was assumed that the series had ended, until Turkeys We Have Loved and Eaten (and Other Thankful Stuff) was announced for and later released in August 2012. It was later revealed that Park had suffered a long battle with ovarian cancer and she passed away in November 2013, most likely putting an end to the idea of any more new releases in the series.

The Junie B. Jones series made ALA's list of the top 100 challenged books or books series from 2000-2009, related to complaints regarding the social values taught by the books and that Junie B. Jones is a poor role model, due to her poor spelling & grammar and mouthiness. This series has spawned multiple stage shows by TheatreWorks USA.

Junie B. Jones celebrated her 20th anniversary in 2012 and a full-color anniversary edition of the first book in the series, Junie B. Jones and the Stupid Smelly Bus, was released in April 2012, with bonus material. The aforementioned Thanksgiving book was also released.

Junie B. My Valentime, marketed as a "companion book" to Mushy Gushy Valentimenote despite that being a "kindergarten" book, and Junie B. appearing in her "first-grader" design on the cover, was released posthumously on December 24, 2013 and is described as being 30 full-color cardstock valentines, 2 pages of stickers, and 9 pages of Junie B. musings on Valentine's Day.

In 2015, all of the books in the series were reissued in a new paperback format with a unified design across all of the covers and the "Junie B. First Grader" books issued under of the banner of simply "Junie B. Jones."

an adaptation of the books.

Junie B. Jones and her books contain examples of the following: