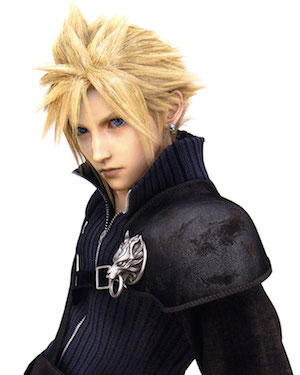 Hair that defies gravity.
"…is my hair too spiky? Not spiky enough?"
— Phoenix Wright, Phoenix Wright: Ace Attorney – Justice For All
Advertisement:

Spiky hair is the process of using gel and hairspray to make the hair stand on end like spikes sticking out of the head. It's often associated with late '70s Hair and '80s Hair and the punk rock subculture of that era. In fiction, it's used to show that a character is wild and cool as well as being badass.

While spiky hair is prominent in real life, fictional characters are almost always shown with perfectly spiked hair despite the fact that it would get flattened while they're in bed or from the day-long rainstorm. While it is a typically-male hairstyle, it has become somewhat fashionable for women to have a spiky hairstyle.

A perennial favorite of the Friendly Neighborhood Vampire. Why? No one knows. Maybe it reminds people of fangs. A staid, conservative character suddenly swinging to radical spiky hair may be an Expository Hairstyle Change to let you know they're going through a major shift in values.

Bree is also a free spirit who likes challenging the stuffier residents of the village. She later says that when Peggy Taxman saw Bree's hair in church, Peggy gave her a look that "would have curdled milk." In Bree's estimation, this is a feature, not a bug.