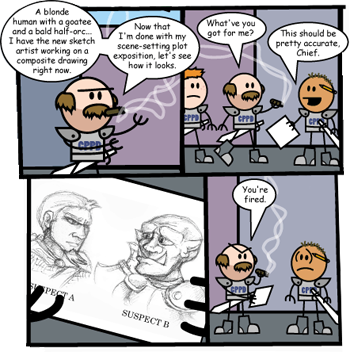 "What are these weird bumpy things between their eyes?"
"They just can't get my nose right!"
— Flynn Rider, Tangled
Advertisement:

That is, of course, unless the Rule of Funny is in play.

When this happens, the composite sketch will inevitably be a hideous caricature of the actual person. Of course, because it's the Rule of Funny we're talking about here, this will typically do absolutely nothing to prevent people from recognizing the person on the sketch anyway.

A frequent inversion is for the composite sketch to be very accurate but the character himself, either out of obliviousness or vanity, insisting it looks nothing like him. Another variation will feature a character creating a face completely out of their imagination to blame something they did on a made-up individual, only for the person they described to actually exist and be arrested as a result of their lie. In a bout of Stylistic Self-Parody, animated or comic mediums will have the composite drawn in a realistic style instead of the art style of the series itself.

Contrast Super Identikit. This can also sometimes happen because the Suspect Is Hatless.

"I fear they may have conflated our countenances, my lady."

"I fear they may have conflated our countenances, my lady."