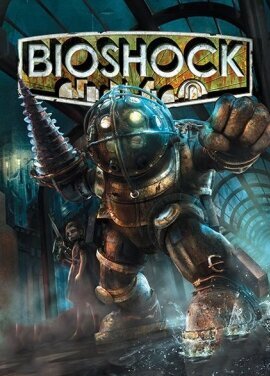 BioShock is a 2007 First-Person Shooter/immersive sim with survival horror and RPG Elements produced by Irrational Games, then known as "2K Boston" and "2K Australia". It is a spiritual successor to the System Shock games produced by the same company, and the first game in the BioShock series, followed by BioShock 2 and later by BioShock Infinite.

The year is 1960. You play as Jack, a Featureless Protagonist whose commercial flight crash-lands in the Atlantic Ocean. With nowhere else to go, he enters a mysterious lighthouse. Beneath the surface, there lies an underwater city, Rapture, founded in The '40s by eccentric billionaire Andrew Ryan. However, Jack immediately discovers that Rapture is overwhelmed by hordes of "splicers", i.e. the last surviving citizens of Rapture, who were driven mad from a powerful but addictive mutagen. This, coupled with Ryan's own draconian policies and laissez-faire attitude toward the product's sale and use, has reduced Rapture to an art deco asylum with seemingly no possible avenue of escape.

Jack's arsenal includes both traditional (and not-so-traditional) firearms and "plasmids", special gene-modifying injections that give the user incredible powers such as telekinesis and pyrokinesis. Jack can also hack Rapture's own security cameras, robotic drones and turrets and turn them against the splicers.

invoked Irrational's creative lead, Ken Levine, based the story on the aesthetics and Objectivist writings of Ayn Rand, most notably Atlas Shrugged. The fate which befalls Rapture — intended as a haven for Earth's best and brightest — can be viewed as either a logical conclusion of that book, or what happens if any "false" objectivist refuses to follow their philosophy to the letter. However, Levine wrote the game so that it itself refrains from taking a side in the Objectivist debate; the Aesop of Rapture, if it can be said to have one, is that achieving a utopian society is unwinnable by design.

BioShock: Rapture is a prequel novel which expands on the psychology of the residents of Rapture, specifically those with audio diaries, revealing things like how Fontaine isn't even Fontaine's real name - he was a conman who killed the original Captain Fontaine to smuggle himself in and used Rapture's lack of regulation to his advantage in his parasitism.

BioShock and its sequels, BioShock 2 and BioShock Infinitenote  Console users get a PC port of Infinite, received an Updated Re-release in BioShock: The Collection for PlayStation 4, Xbox One, Microsoft Windows in September, 2016, and later on the Nintendo Switch in May 2020. It includes the all of the singleplayer content in exclusives and Downloadable Content, the Museum of Orphaned Concepts, a developer commentary called Imagining BioShock, and an upgrade to 1080p resolution and 60 fps on all platforms.

BioShock contains examples of these tropes:

As Atlas advises, if you hit a Splicer with the Electro Bolt Plasmid while they're standing in water, it'll cook them crispy on the spot.

As Atlas advises, if you hit a Splicer with the Electro Bolt Plasmid while they're standing in water, it'll cook them crispy on the spot.