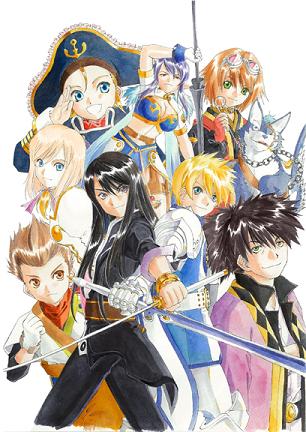 In the world of Terca Lumireis, Blastia are a part of everyday life. From drawing water to animating robots, the purposes of Blastia are plentiful and its utility is vital. One of the most important uses of Blastia is to project gigantic barriers that protect towns from the armies of wild monsters roaming the world. Only two factions are permitted to leave the protection of these barriers: the Imperial Knights of the Empire, which regulates Blastia use, and the Guilds, who reject Imperial rule and work together to maintain a stable society. As a result, most people never experience the vast and undiscovered world that lies outside their homes.

Yuri Lowell is a former Imperial Knight who lives in the lower quarter of a metropolis called Zaphias, capital of the Empire. Yuri often witnesses the injustices that the people living in poverty experience at the hands of the ruling class, and because of government inaction he often ends up taking justice into his own hands. However, Yuri knows that this is not enough, and wishes to change the world so that such injustices never occur in the first place.

One day, a thief steals a fountain Blastia vital to the people of the lower quarter and Yuri lands in jail while attempting to catch him. While making his escape he runs into Estelle (Estellise Sidos Heurassein), an intelligent but naive noble curious about the outside world and desperate to reach Yuri's childhood friend and Imperial Knight, Flynn Scifo. Shortly after, the two fend off an assassin trying to kill Flynn, motivating the two to try to find Flynn to protect him from what appears to be a plan from within the Empire to kill him. After escaping from the clutches of The Empire, they decide to venture past the barrier, catch the thief, track down Flynn, and see the world for themselves.

On their journey, they acquire an eclectic party: Repede, Yuri's faithful hound; Rita Mordio, a spunky and anti-social genius mage; Karol Capel, a boisterous young boy trying to prove himself to his Guild; Judith, a busty and enigmatic Krityan woman who is destroying Blastia for secretive reasons; and Raven, the middle-aged confidant of a high-ranking Guild leader. The PlayStation 3 Updated Re-release adds Patty Fleur, a young pirate searching for the treasure of the legendary pirate Aifread.

Tales of Vesperia is the first HD game of the Tales Series. It was first released in 2008 as an exclusive for the Xbox 360, and became a Cult Classic despite the unusual choice of console (as previous Tales of games had generally preferred Sony's or Nintendo's consoles), to the extent that it managed to make the otherwise-extremely-unpopular system sell out in Japan. It later received an Updated Re-release for the PlayStation 3, which never left Japan, leaving diehard fans to rely on a Fan Translation once modifying PlayStation 3 games became possible. However, for the game's 10th anniversary, the PS3's version contents were brought over in another re-release as Tales of Vesperia: Definitive Edition, on January 11, 2019 for PlayStation 4, Xbox One, PC, and Nintendo Switch.

There is also a prequel movie — Tales Of Vesperia: The First Strike — which focuses on the brief period of time that both Yuri and Flynn were members of the same Imperial Knights brigade, the Niren Corps.

Yuri, Estelle, and Flynn are also playable characters in the crossover game Project X Zone and its sequel.

See also Scarlet Nexus, which was shares a lot of the team behind this game.