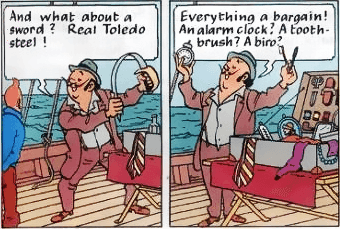 Ever wonder what those stores that buy anything do with the random stuff they accumulate?

It might be a little drug store down by the corner that, in addition to medications and cosmetics also has entire rows of audio equipment and computer games and a toy section. It might be an expansive, labyrinthine mega-mart with a grocery store, hardware store, and clothing, one that's so large it has its own zip code. However, when you walk in, you can be assured of one thing: It sells everything. Absolutely everything. (Except, if you happen to be a Butt-Monkey, the one thing you're looking for.)

It sells things you would never expect to see in the same store together—such as, say, baseball bats, frying pans, instant ramen, and cold remedies. The smaller the store, the more specialized you would expect it to be, so the more unlikely this seems—why is a tiny general store out in the middle of the sticks offering fine art?

Sometimes, the stuff for sale there shatters the bound of all logic—where on earth (or the moon) did they get their hands on a lunar lander? Lord only knows who their suppliers are. If the shop is little and out-of-the-way, it may come bundled with a possibly insane, Q-like proprietor who is quick to suggest all manner of goods to his or her customers. If the shop is enormous, expect to need a map just to find your way to the microwave popcorn.

Also quite common in video games, due to the fact that the gameplay tends to be sculpted around the hero's quest. If you find a shopping district full of these then you are in a Bazaar of the Bizarre. Oftentimes, even the far reaches of the unknown are populated with tiny tent stores that boast a huge selection despite no one shopping there (in fact, being so far into the game, they're likely to have more stuff). If all auction houses, stock exchanges and brick & mortar stores are this regardless of location then you probably have an MMO on your hand.

Contrast with Severely Specialized Store. Compare with We Buy Anything.