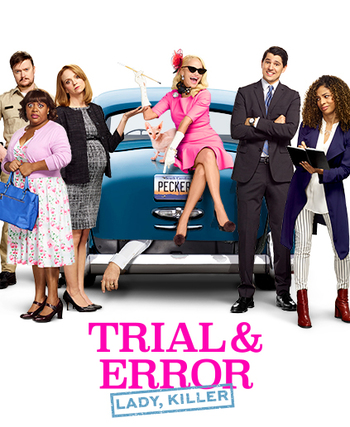 Trial & Error is a single-camera Mockumentary anthology sitcom starring Nicholas D'Agosto, Jayma Mays, Steven Boyer, and Sherri Shepherd. Each season focuses on a sensational trial that occurs in the town of East Peck, South Carolina as the core cast of oddball legal experts try to win the case by whatever means necessary.

Enter New York attorney Josh Segal. What seems like a simple defense job is complicated by one thing: Larry is ridiculously bad at not casting suspicion on himself. Combined with his Good Ol' Boy assistant Dwayne and off-kilter receptionist Anne, Josh finds himself in an uphill battle to keep Larry off of death row.

In Season 2, subtitled Lady, Killer, Segal and Asssociates are hired to defend Lavinia Peck-Foster (Kristin Chenoweth), who is accused of murdering her husband. Lavinia is charming and well-liked around East Peck, but the defense team's job is made all the more harder because Lavinia's husbands body was found in the trunk of her car.

The series ran for two seasons and ended after NBC let its contract with the production lapse and no other channel expressed any interest in picking it up.