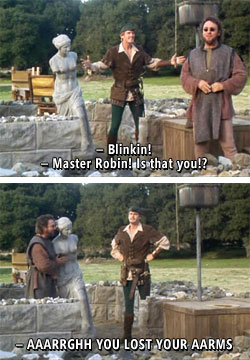 "But you grew some nice boobs."
"Can the blind lead the blind? Will they not both fall into a pit?"
— Jesus, Luke 6:39, The Bible
Advertisement:

This is when a character makes some kind of error to do with their surroundings simply because they lack sight, either permanently or due to Temporary Blindness, or have misplaced their glasses. It can be anything from mistaking one object for another, one person for another, one location for another, or even whether something is there or not. For example, the character could pick up a bottle of vegetable oil instead of the intended bottle of water and drink it.

The character doesn't have to be completely blind, either — people who are extremely near- or farsighted, or whose vision is extremely blurry, can also do this. Or it might just be dark.

This trope is used generally for comedic effect. Often greatly exaggerated, to the point of serious Fridge Logic.

See also Blind and the Beast.