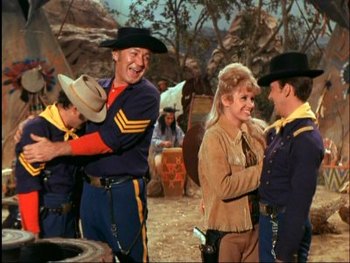 From left to right: Agarn, O'Rourke, Wrangler Jane and Capt. Parmenter.
"The end of the Civil War was near
when quite accidentally
a hero who sneezed abruptly seized
retreat and reversed it to victory.

His Medal of Honor pleased and thrilled
his proud little family group.
While pinning it on, some blood was spilled,
and so it was planned that he command F Troop.

Where Indian fights are colorful sights,
and nobody takes a lickin'.
Where paleface and redskin
both turn chicken.

When drilling and fighting get them down,
they know their morale can't droop
as long as they all relax in town
before they resume with a bang and a boom. F Troop!"
Advertisement:

F Troop was an American television sitcom that aired on ABC from 1965 to 1967. It centered on the men and officers of Fort Courage, a fictional U.S. Army outpost in 1860s Kansas. The commanding officer was Captain Wilton Parmenter (Ken Berry), a good-hearted but accident-prone leader who fell into his rank after inadvertently instigating the final charge at the Battle of Appomattox. Due to his ineptitude, his superiors gave him command of Fort Courage, a dumping ground for the Army's useless soldiers.

Much of the show's humor came from the schemes of Parmenter's non-commissioned officers, Sergeant Morgan O'Rourke (Forrest Tucker) and Corporal Randolph Agarn (Larry Storch). They often conspired with the local Indian tribe, the Hekawis, as they operated their illicit business, O'Rourke Enterprises. Parmenter also had to fend off the marriage-minded plans of his girlfriend "Wrangler" Jane (Melody Patterson), a local shopkeeper/postmaster. The Hekawis watched their goings-on with bemusement, though they often got roped into their shenanigans.

Definitely not to be confused with the zombie Super Soldiers from Project Superpowers.