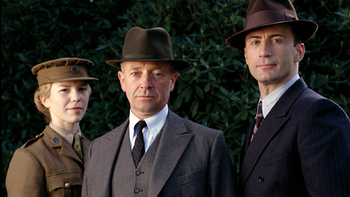 The main cast. Left to right - Samantha Stewart (Honeysuckle Weeks), Christopher Foyle (Michael Kitchen) and Paul Milner (Anthony Howell)
"All illegal. All morally unacceptable. How would you like to justify it?"
"Necessities of war, Mr. Foyle — in which there is no morality."
— "The French Drop"
Advertisement:

British crime drama, debuted in 2002, starring Michael Kitchen as DCS Christopher Foyle, a high-ranking detective in Hastings during World War II. When his requests for transfer into the war effort are denied, the modest, mild-tempered Foyle begrudgingly returns to his duties on the Home Front, only to find that his job is more in-demand than ever, as people all over are taking advantage of the panic, confusion and chaos caused by the outbreak of war to try and get away with murder — in many cases literally.

Foyle is assisted in his investigations by his driver, Samantha Stewart (Honeysuckle Weeks), a perky Mechanized Transport Corps (MTC) officer transferred to the police for the duration owing to Foyle's inabilitynote Apparently to drive, not an uncommon thing then, note  Sam’s actual role is to ensure that Foyle has a car available when needed, as well as drive - cars then, needing regular and frequent maintenance, and it is a pool car, not specifically allocated to him and who eagerly involves herself — at times to Foyle's exasperation — in the investigations that arise, and his sergeant, Paul Milner, an ex-soldier who rejoined the police after his leg was shot off during the Battle of Norway. Another recurring character was Foyle's son Andrew, a dashing Spitfire pilot with the RAF.

The show often attempts to subvert the traditional myth of wartime Britain as a place where everyone pulled together for the common good, showing how scheming, cowardly, cynical and desperate people at the time could be, and the various ethical and moral dilemmas that fighting against the Nazis raised; a common theme raised in the series is the ethics of police work and crime during wartime, with many of the more cynical characters querying the validity of investigating seemingly trivial crimes (and even murder), during a war that killed thousands every day. As such, along with the murders and intrigues standard for the genre, early episodes in particular often focus on draft-dodgers, fascist sympathizers, black-marketeers, looters from bombed-out houses, the unfair treatment of conscientious objectors, homosexuals, enemy aliens and so forth. Episodes are often themed around a particular event or issue that occurred during the war (such as the Blitz, Dunkirk, the entry of the Russians and the Americans into the war and the secret weapons and tactics employed by the British during the time), with Foyle often coming into conflict with both higher-ups and Secret Service operatives when his investigations begin to touch upon matters which the War Office would prefer were kept secret.

When ITV decided to stop making the series and make two final episodes, one each for 1944 and 1945, there were many complaints; series creator Anthony Horowitz certainly wasn't happy. In the event, it was not only given a concluding season, ending on V-E Day, but subsequently renewed for three more seasons set in the war's aftermath: in the final two seasons, Foyle, having retired from the police force, is recruited by MI5 and becomes involved in the early days of the Cold War.