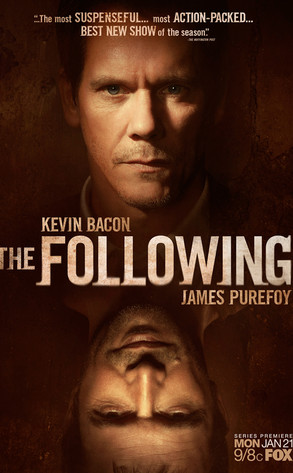 "I thought I might go more traditional this time, you know, villain, good versus evil. I need a strong protagonist so that the reader can truly invest, a flawed, broken man searching for redemption, and that is you."
— Joe Carroll
Advertisement:

The Following is a 2013 TV series starring Kevin Bacon.

In 2004, Joe Carroll (James Purefoy), a professor of literature at a small Virginia university, murdered 14 female students. He was eventually captured by Ryan Hardy (Bacon), an FBI agent assigned to investigate the murders, who saved the life of Carroll's last victim in the process. However, while doing so, Hardy was stabbed in the heart and forced to leave the bureau due to his injuries. Hardy later wrote a book about the case.

Nine years later, while awaiting execution, Carroll escapes from prison and Hardy is brought back as a consultant. Despite Hardy's skills, intuition and best efforts, Carroll manages to finish what he started by killing the one victim whom Hardy managed to save. His immediate surrender to the authorities reveals that the threat he poses has only just begun, as he demonstrates that he has recruited an army of followers for the purpose of finishing his work.

On March 4, 2013, the show was renewed for a second season, scheduled to air in 2014 and match the first's 15 episodes. On March 7, 2014, it was renewed for a third season, which was the final one thanks to FOX's cancellation of the show.

Not to be confused with the 1998 film directed by Christopher Nolan, Following.