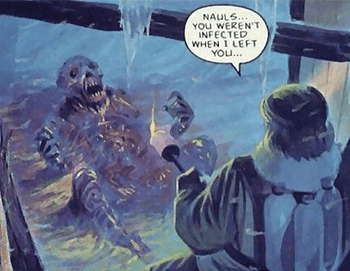 "Well Brian, I'm sorry that Jess died during the commercial break, but it was a very nice funeral."
— Lois Griffin, Family Guy
Advertisement:

Killed Offscreen is the term used to describe the occurrence of a character dying outside of the audience's view. The character's corpse may be seen later, or confirmation may be given by another character, who witnessed the death/found the corpse.

See also The Character Died with Him. Bus Crash is when this happens to a character who'd previously been written out of the series in a non-lethal manner. When a character dies out of the view of another character due to a brief distraction, that's Distracted from Death.

Compare Gory Discretion Shot and Sound-Only Death. As this kind of death tends to not be a very dignified exit for a character, seeing how it is in all regards a rather anti-climatic way to die and often (though not always) carries with it the implication that that said death was not important enough to be shown on-screen, there tends to be a lot of overlap with Dropped a Bridge on Him. Can also overlap with Sudden Sequel Death Syndrome when the death takes place between works.

Occasionally, this can be used for when the viewer and most of the cast are under the impression that the character was still alive between the character's death and when it is learned that the character is actually dead. This often happens when the killer performs a Kill and Replace on the victim, or otherwise hides the victim's body to keep the fact that the latter is dead secret.

As a Death Trope, beware of spoilers!