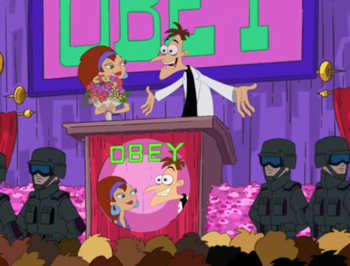 "We've got a love strong enough to rule the whole wide world!"
Xanatos: We're genetically compatible, highly intelligent, and have the same goals. It makes perfect sense to get married.
Fox: True, but what about love?
Xanatos: I think we love each other, as much as two people such as ourselves are capable of that emotion.
— Gargoyles
Advertisement:

It's the classic story. Big Bad meets Baroness. Baroness meets Big Bad. They look up, their eyes meet — and a flowering meadow goes up in flames while a thousand iron violins wail their love song. It's a match made in Hell!

Lord Worldbreaker and Lady Firestorm are dangerous enough by themselves. Add The Power of Love to the mix, and things are going to get downright apocalyptic. A pair of villains with love on their side is enough to give even the most hardened heroes pause. Defeating one will enrage the other — or make them vastly more sympathetic — and worse yet, villainy done out of love can't be entirely evil, can it?

...of course, they're still villains, so you can never really be sure of that whole "true love" thing. If one of them truly loves the other, expect remarkable sacrifice — only for the other to take everything they have to offer and then discard them afterward. There are few more effective ways to cross the Moral Event Horizon than to betray genuine love.

But if both were faking it, expect them to show their true colors at the same time. Hilarity Ensues — and it's never mentioned ever again.

The most classic version of this trope occurs when two previously established antagonists take a newfound interest in each other, but it can also involve a newcomer falling for an established villain, or even two villains who were a couple from the start. In the first-mentioned scenario, Enemy Mine may occur in order to match the united power of the couple — which can get particularly interesting if the "bedfellow" is another villain, who is driven by jealousy...

They may form a Big Bad Duumvirate.

Compare Villainous Friendship, when the two are truly friends with each other, but not in a romantic way. Contrast Minion Shipping (which involves minions instead of actual villains) and Mad Love (which is one-sided). Outlaw Couple is the petty crime version of this. In the case of fiction with multiple villains where taking two out of the equation would still leave a bunch of bad guys, if it's genuine on both sides this can be used as a prelude to a Heel–Face Turn or at the very least a "Get out of Jail Free" Card. If the couple in question is heterosexual, expect the man to be the more important half of the couple, possibly making her more of a Dark Mistress. On the other side of things, consider Lady Macbeth.

This is a subtrope of Even Evil Has Loved Ones. Not to be confused with Awful Wedded Life, which describes the marriage itself to be terrible, not the people involved.note While those two tropes can overlap (see: Lord Zedd and Rita Repulsa in Mighty Morphin' Power Rangers), they certainly don't have to (see: R.L. and Angelique in Kevin & Kell). Contrast with the Celibate Hero, a heroic character who is not in a romantic relationship and avoids being in one, or at least used to be.

The MUTOs converge in San Francisco to mate, meeting each other for the first time

The MUTOs converge in San Francisco to mate, meeting each other for the first time