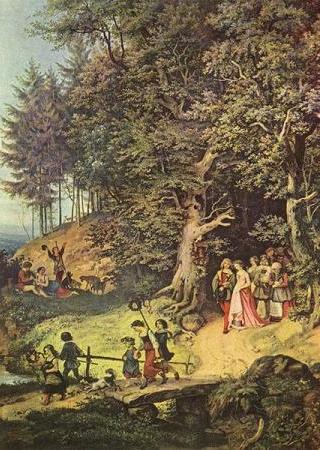 Bridal Procession in a Spring Landscape by Ludwig Richter
"It is a distinctly human act to marry. Animals require no contracts or dowries. The hen and the rooster make no vows. Leave it to people to complicate matters with their ceremonies and their cakes. Is it not a wonder that anyone marries at all?"
— Lady Whistledown, Bridgerton
Advertisement:

Marriage. Marriage is what brings us together today. What happens when the newlyweds come home from the honeymoon and start living with each other. It's simultaneously a milestone, a building block for a family, a way to join two older families, a social institution, a public declaration and a very private affair. Many of these tropes are meant to play out over years; others are about the social clout that married status confers; others are about power and in/equality, such as who holds the purse strings.