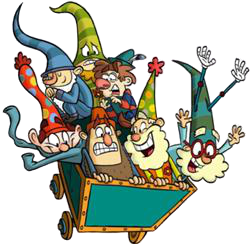 The 7D is a 2014 Disney XD original animated series. The series follows the adventures of the 7D, the seven dwarfs of Snow White. They live in the land of Jollywood, ruled by Queen Delightful, and are often set against Grim and Hildy Gloom, two villains who wish to take over the kingdom by stealing the magic jewels in the 7D's mines.

The show was cancelled after two seasons and ended in 2016.

The 7D provides examples of:

"Surprise" ends with the dwarfs celebrating Starchy's birthday with a dance party in the castle.

"Surprise" ends with the dwarfs celebrating Starchy's birthday with a dance party in the castle.