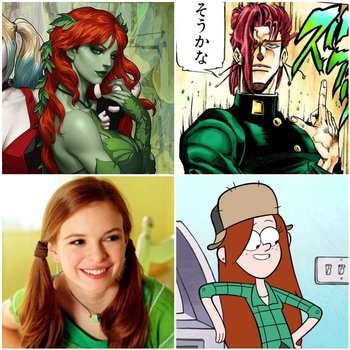 Basically, this is when the main outfit of a redhead, auburn, or even a pink-haired character is (at least mostly) green. This trope can sometimes be used to hint that somebody is of Irish descent, but sometimes, illustrators use it for traditional Red/Green Contrast or because they just feel like it. Bonus points if the character in question has nature-themed abilities.

The trope comes from a long-standing tradition among fashionistas that red and orange hair contrasts best against green or blue attire, which is one reason redheads are encouraged to wear green, and sometimes blue, to make a striking visual appearance.