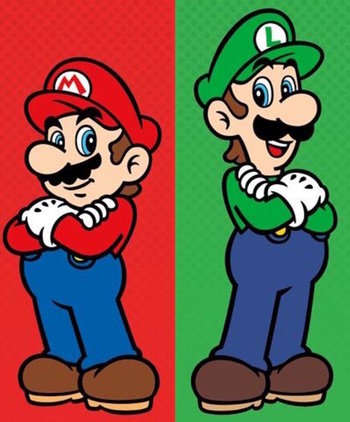 "Red is the color of lust, but green is what red leaves behind."
— The Lady, The Green Knight
Advertisement:

In basic complementary color theory, Color Contrast (a Super-Trope) refers to the use of any two polar opposite colors on the wheel. When such colors are put together in a single image, with almost no other color presence, the effect is called popping, or standing out heavily. This, in turn, colors films to have a strong contrasting palette as the natural technique. Red and Green are no exception.

In many ways it is more associated with the battle of good and evil, whichever color representing which being interchangeable depending on the work:

It is also one of the reasons why, despite red hair being technically orange, Significant Green-Eyed Redhead and Redhead In Green are so popular.

Suffice to say, red and green is a prevalent color scheme for Christmas, and it has been around for centuries

, used by ancient cultures like the Celts and the Aztecs placing hollies and poinsettias respectively to provide color and warmth to the winter. Red and Green is further solidified as THE Christmas colors after an artist named Haddon Sundblom

was commissioned by Coca-Cola to depict Santa in an all-red suit complemented with evergreen backgrounds. In almost every Christmas-themed media, expect red and green to pop up more.