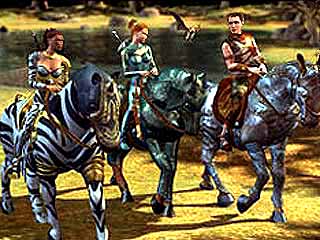 A late 2001/early 2002 Canadian CGI television series set in an unspecified medieval fantasy kingdom (possibly Occitania), following Princess Djana, barbarian Tara, Shogi apprentice Herek, and Wip the Dragon as they fight against the evil Prince Bragan and his sorcerer ally Kwodahn, who scheme to usurp the power of the throne.