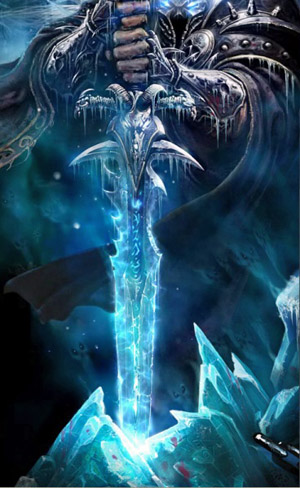 In every sense of "cool".
"I can tell you with no ego, this is my finest sword. If on your journey, you should encounter God, God will be cut."
— Hattori Hanzo, Kill Bill

There is something a sword has that other weapons don't. It could be that it is an Elegant Weapon for a More Civilized Age, or perhaps it's because sword fights just look so impossibly cool. Often Heroes Prefer Swords.

These weapons even come in multiple categories:

Sometimes the sword is especially special because:

This trope is Older Than Feudalism, because the sword is a very, very old weapon and there are tons of examples from mythology. Possibly the most iconic Cool Sword of all is Excalibur, the sword the Lady in the Lake gave to King Arthur (which supposedly wasn't the original Sword in the Stone).

And no, having a sword is not (necessarily) Compensating for Something.

Recording the sheer number of characters who use swords in media would make for a VERY long trope. Basically, name any hero from a Heroic Fantasy series or an RPG (of any genre), and chances are he'll be using a sword. Thus, this trope should be reserved for cool swords; those with some exceptional quality, name, or power. Not just any old sword will do.

Compare its Gun Counterpart, Cool Guns. For swords that aren't fantastically and impractically cool, see our Useful Notes: Swords page. Oddly Shaped Sword is the Sub-Trope for swords that have a really weird shape.

If Daniel finds enough chalices, Woden the Mighty will loan him his fabled Broadsword for his quest.

If Daniel finds enough chalices, Woden the Mighty will loan him his fabled Broadsword for his quest.