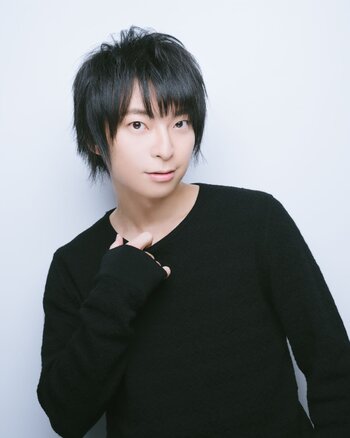 Who the hell do you think I am? I'm Tetsuya Kakihara. Not my bro, Katsuyuki Konishi! I'M ME! I'M ALL FIRED UP NOW!!!!!
Jawohl...
Advertisement:

A popular newcomer to the Japanese voice-acting biz. Tetsuya Kakihara (柿原 徹也), born December 24, 1982, is one of the few well known seiyuu (the others being the Athens-born Haruna Ikezawa and US born Satoshi Hino) who wasn't born in Japan. His birthplace was Düsseldorf, and living there for several years allowed him to reach fluency in German. He didn't stop there, going on to learn English, Spanish and Latin to boot. Later he moved out (or rather ran away, according to Japanese Wikipedia) to Japan where he began active work as a seiyuu, being the only Japanese guy to voice the German-speaking Armed Devices Graf Eisen, Laevatein and Strada. However, it took his starring role in Tengen Toppa Gurren Lagann to cement his place in the industry. Go beyond the impossible and kick reason to the curb, indeed. Furthermore, his voice is also widely recognized as Natsu Dragneel's, which can be considered as his second most important role of his career.

Whenever his name is credited in any Magical Girl Lyrical Nanoha installment, it's written in Latin letters and western order, mostly because of the aforementioned Gratuitous German lines.

Has quite a few roles with Marina Inoue, Yuichi Nakamura, and Tomokazu Sugita.

I am Tetsuya Kakihara! THE END HAS COME!