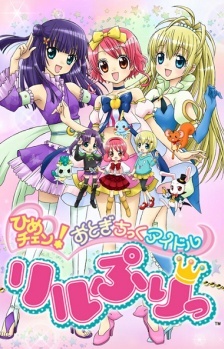 Fairyland is in trouble. Its princesses and their respective worlds are disappearing, causing a ripple effect on Earth where their stories are popular. In order to save Fairyland, the Queen sends three "mapets" (magic animals), Sei, Dai, and Ryoku, to Earth with magic gems to find three girls who can become the "Super Miracle Idols," the princesses Snow White, Cinderella, and Kaguya-hime. Those "princesses" end up being three very ordinary little girls: Yukimori Ringo, Takashiro Leila, and Sasahara Natsuki. The gems transform them into older singing superstars, and after their accidental debut at their favorite singer Wish's concert, they become known as "Little Princesses," or "LilPri" for short. Now they must use their songs to draw and collect Happiness Tones from humans in order to restore Fairyland.

The anime is based on Sega's trading card arcade game Lilpri - Yubi Puru Hime Chen!, which lets players customize their own idol and sing, dance, and cast spells. On May 29, 2010, Crunchyroll began streaming the series under the title Spellbound! Magical Princess Lil'Pri

. There is also a manga that began running in February 2009 called simply "Lilpri", written by Mai Jinna, the game's character designer.

Not to be confused with Hime-chan no Ribon.