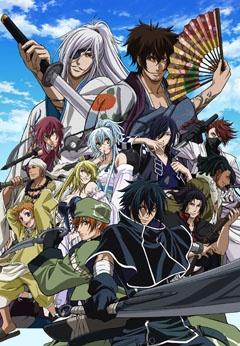 No, it's not a Reverse Harem series
Advertisement:

Brave10 and its sequels, Brave10 S and Brave10 Tawamure form a Jidaigeki fantasy series by Kairi Shimotsuki, following the lives of the Sanada Ten Braves, ten loyal ninjas serving under Sanada Yukimura. Rather than going for historical accuracy, the manga (and its anime adaptation) takes a mythical approach, with ninja magic and playful anachronisms in abundance.

The main protagonist is an Iga ninja named Saizou, who meets an Izumo priestess called Isanami on the run from the ninjas who destroyed her temple. He reluctantly protects her on her journey to Sanada Yukimura's castle, only to find himself drawn in by the schemes of the lord there. Yukimura wants to gather 10 warriors, a party unrivaled in skill and power, to protect Ueda from the perils besetting it although he remains vague on just what and who the real peril is...

Shimotsuki is well known for her Yaoi work, but she has also worked on the Sengoku Basara franchise and written a Jidaigeki infomanga. The series takes light notes from both, targeting a Seinen/Shoujo crossover audience.note To the point the series moved from Comic Flapper to Monthly Comic Gene for the sequels.