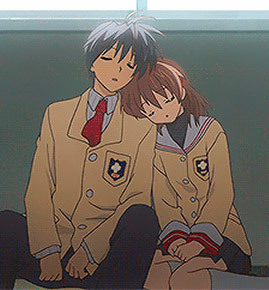 All together now (but very quietly): "AWWWWWWWWWWW"
"In the terminal she sleeps on my shoulder
Hair falling forward, mouth all askew."
— Vienna Teng, "Recessional"
Advertisement:

A Ship Tease shot of two characters — the Official Couple, the official not-a-couple, or just two of the shippers' favorites — sleeping together. They're fully clothed, probably in a public place in broad daylight, one's head pillowed on the other's shoulder, chest, or possibly lap. They were just very tired, or sitting through something that was really, really boring. Perhaps their group was attacked or some magic backfired, and they were knocked unconscious and landed in just the right position.

In any case, it serves two purposes: the perfect screenshot for shippers, and the perfect opportunity for viewers near and far to simultaneously say, "Awww, they look so cute together!"

Of course, this doesn't have to be romantic. A pair of siblings, a parent and child, very close friends, et cetera can also pull off a sort of Sleep Cute. Either way, it is a strong source of good, happy feelings and a very good Go-to-Sleep Ending. A big Tear Jerker variant is to have the "sleeping" characters be dead, overlapping with Together in Death.

Example of:
Has Two Mommies