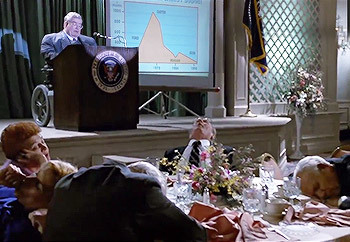 "It put this reviewer in a deep sleep. And I awoke that I was spared attending the aging matinee idol's ranting and posturing."
—Oliver Harding on Edward Lionheart's acting, Theatre of Blood
Advertisement:

Sometimes a speaker, be it a speaker delivering a speech, or just a person conversing, is so boring or uninteresting that the people listening to them can't stay awake.

In general, the speaker isn't aware that people are falling asleep on her at first. Sometimes this fact will be revealed to the audience but not to the speaker, as a way to clue the audience into the irrelevance of what the speaker is saying. Other times, the speaker and the audience will discover the listeners' sleepy state together (often in the form of a sudden loud snore).

Upon discovering what has happened, the speaker may magnanimously cover his sleepy victim with a blanket or tuck them into bed.

Oftentimes the speaker is Windbag Politician or The Bore. Can result in Asleep in Class. Related to Long Speech Tea Time, but this trope is about characters unintentionally falling asleep on the speaker rather than deliberately ignoring them.

This trope is not the same thing as a lullaby, which is a deliberate attempt to lull someone to sleep (and thus carries none of the embarrassment for the singer that this trope carries for the speaker).

Jouglat pours his heart out and Martinez...falls asleep during it.

Jouglat pours his heart out and Martinez...falls asleep during it.