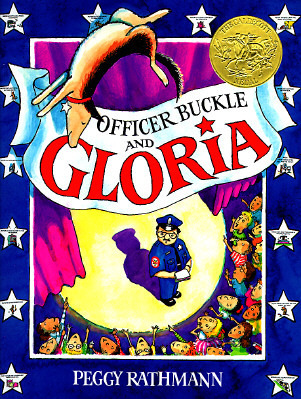 Napville's never seen a safety talk like this before...
Advertisement:

Officer Buckle and Gloria is a 1995 picture book by Peggy Rathman, which won the Caldecott Honor Medal the following year.

A safety-conscious police officer has trouble getting the students at the local school to pay attention, until he brings in a police dog named Gloria, who energizes the performance. However, when Officer Buckle finds out who has been captivating the crowd, he quits his lecture tour. After the school asks Gloria to give a solo "safety speech", will the result change her partner's mind?