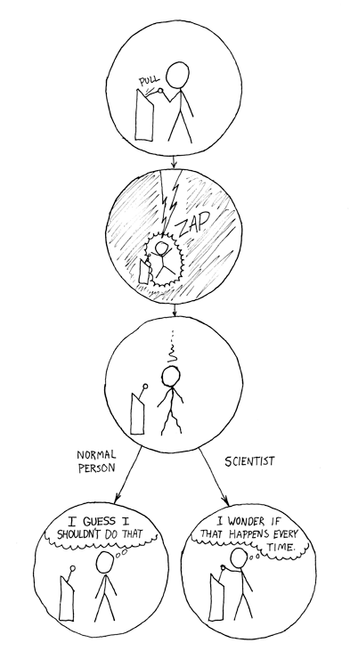 Only one way to find out...
"A learning experience is one that tells you, 'You know that thing you just did? Don't do that.'"
— Douglas Adams

The human mind is an interesting thing. When we put our hand on a hot burner or put a penny in a lightsocket, what's left of us tends to not want to do that anymore. We learn from our mistakes.

Characters in a story usually begin their journey with little actual experience in the real world. Somewhere along the way, they figure out how to manage. There is usually something either said or implied that being in a constant life or death situation has forced them to find some way to survive. By default, they usually become damn good at it.

When the time for action has come, the time for preparation has passed. Sometimes your Training from Hell is not enough. Other times you have no training whatsoever. This is often how someone Took a Level in Badass. Some are so good at this that they have Awesomeness by Analysis, maybe to the point of being an Instant Expert. Maybe, somewhere along the line, they learned Mortal Kombat.

This is a staple of MacGyvering, the devices they make work because they have to. The Crazy-Prepared person is either this way because of past experience, or because they want to avoid the bruises associated with it. And this is implied with a person who has Seen It All — they have experienced it personally.

Truth in Television: want to learn German, live in Germany. Want to learn Japanese, go to Japan. Regularly communicating in the native language in order to pay for transportation, food, rent, etc. is more efficient than a couple hours several times a week in a classroom. If you're wrong, you don't get what you need. A mundane version of Die or Fly, in other words. That said, formal teaching is still useful to cover situations and areas that do not turn up every day, to spot errors, or correct bad habits. Both kinds of "hard work" drill in the knowledge. There is a good reason why a leader needs to know what it is like at ground zero.

In Video Games, especially RPGs, this is what they are trying to simulate with Experience Points, especially in the more complicated leveling methods where performing an action repeatedly gives you more points to allocate to that skill area.

See also the Sorting Algorithm of Evil. Compare/contrast Hard Work Hardly Works, The Only Way They Will Learn, Necessary Fail, Sink-or-Swim Mentor, Book Dumb, and Wax On, Wax Off. This is almost always part of the background of a Uncertified Expert.