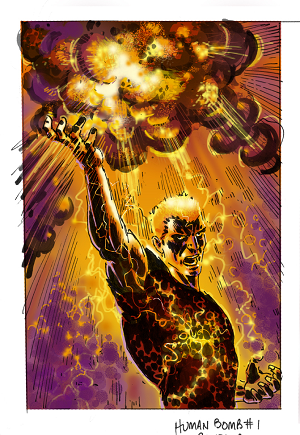 Oh, they're going to have to glue you back together...IN HELL!
"With these mutants, they don't plant the bombs. They are the bombs."
— Bucky Barnes, House of M: Captain America
Advertisement:

Superpowers that involve creating explosions. Can overlap with Why Am I Ticking?, Playing with Fire, and Ludicrous Gibs. See also Action Bomb. Villainous and/or mentally insane users are considered Mad Bombers. For the non-superpower equivalent see Throw Down the Bomblet.