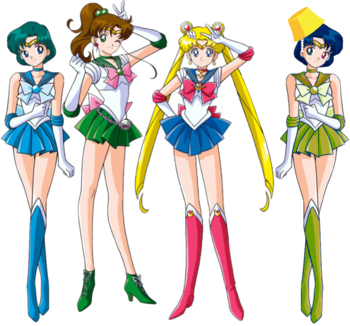 Introducing Sailor Mercury, Sailor Jupiter, Sailor Moon, and Sailor Trope-tan!
In the name of the Fandom, donut steel!
"If an NPC is known as 'the One', I cannot volunteer to be 'the Two'."
— Things Mr. Welch Is No Longer Allowed to Do in an RPG
Advertisement:

In stories where the characters are organized with a kind of official order, hierarchy or theme, it becomes easy to simply expand that group to add new characters of the same type. This means the writer doesn't have to retcon half the Backstory in order to add additional characters to the cast. Likewise, well-done fanfics can use the story's Theme Table to insert original characters, bending canon instead of breaking it.

If this is done to simply add a new character out of the blue, it can give the illusion of added legitimacy to the new character's place within the hierarchy/theme of the cast. If the main characters are the last of their kind, then these characters will be There Is Another.

Unfortunately, many a Self-Insert Fic using this trope is common enough that some fandoms have a knee-jerk hatred of them. Especially when the trope is used to rehash ideas for a role that has already been filled in canon or previous fanfics. However, this concept is not inherently bad and it can still be used legitimately.

So why do Sailor Earths pop up in a given work? Human beings are naturally completionists when it comes to patterns, so if a work feels like an element is missing from it, be it a certain role, personality, skill-set or an actual power, then fans will come in and fill the missing "element". Oftentimes the creators would end up filling that role anyway, either leading fans to exclaim I Knew It!, or disappointing them now that their predictions have been invalidated.

Named for a particularly prevalent phenomenon in Sailor Moon fiction.

See also: Send in the Clones, Elsewhere Fic, and Fan-Created Offspring. Compare Obvious Crossover Method. A would-be member of The Chosen Many. Contrast The Unchosen One, who is a canon character who isn't a member of an order. Not to be confused with the webcomic Sailor Sun, or with the trope Sailor Senshi Sendup (which is about expies of the Sailor Moon cast).