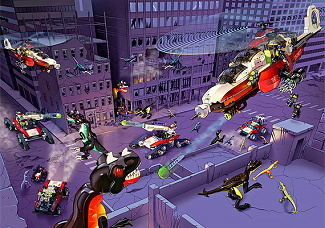 American LEGO is hardcore!
LEGO Dino Attack (released as LEGO Dino 2010 in Europe) is a LEGO Theme released in 2005 and revolving around the conflict of Man Versus Prehistoric Monster... in a modern-day setting!
Advertisement:

Compared to most LEGO Themes of the time, LEGO Dino Attack was considerably Darker and Edgier. LEGO, the company that once refused to produce green bricks in fear that kids would built military vehicles (yes, seriously

), was now churning out sets featuring tanks and helicopters (admittedly not realistically-colored ones) battling dinosaurs in a post-apocalyptic city. And not just any dinosaurs, but evil mutants that can shoot lasers out of their eyes, breathe fire, and shoot lightning.

The story is simple. In 2010, dinosaurs (which may be mutants or Ambiguous Robots) come the heck out of nowhere and wreck major cities, and four survivors (Specs the all-around scientist, Digger the thrilling paleontologist, Shadow the emotionally-driven hunter, and Viper the drafted racer) form the Dino Attack team and use the latest military technology and weapons to combat the dinosaurs and drive them out of the city.

At least... in North America, Japan, and Australia.

European countries got a similar-but-different line titled Dino 2010, which moved the apocalyptic setting to the jungle, dropped all references to the dinosaurs being mutants, and changed the premise from a band of survivors fighting to reclaim a city to a team of hunters deployed to recapture escaped dinosaurs. The most notable difference between Dino Attack and Dino 2010 sets is that Dino 2010 removed all of Dino Attack's over-the-top weaponry and replaced it with chains, grappling hooks, and cages. For instance, Dino Attack's Iron Predator, which is clearly supposed to be a tank, lost its cannon and gained a large T-Rex cage attached on a trailer and was renamed the Dino Track Transport.

In 2012, a Spiritual Successor to Dino Attack was released in the form of LEGO Dino, which many fans of Dino Attack and Dino 2010 have nicknamed "Dino 2012".