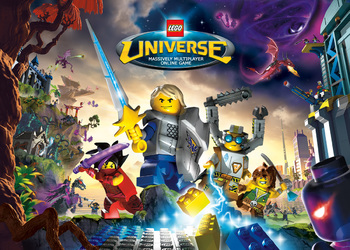 Answer the Call: Save Imagination
Advertisement:

LEGO Universe was an MMOG based on the popular LEGO toys, released October 26, 2010. The official site can be found here

The plot is simply this: a knight, a pirate, a scientist, and a baron travel across the universe, searching for the source of imagination; they inevitably come across a perfectly cubic planet, and land on it. This source of imagination could make any idea come to life...

So the Baron, after going mad on the journey, creates the Maelstrom, a threatening chaotic force. This turns against him and drags him into the source of imagination, where he presumably was absorbed. The source turns dark and is eventually plugged up with the remains of their ship, exploding the planet into fragments.

The remaining crew eventually call upon the help of every available person in the Universe to help ward off the Maelstrom's dark minions, the Stromlings.

In August 2011, the game partially became free-to-play (the first two zones were free for all, with the rest only available to subscribers), but the change apparently failed to attract sufficient amounts of new subscribers, so LEGO ended the game on January 31, 2012.

It later received a Spiritual Successor that was shut down even faster, LEGO Minifigures Online.