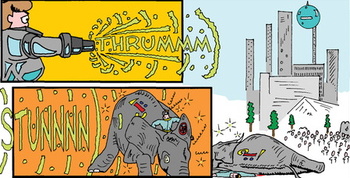 "Well, it projects two parallel unidirectional, high-amplitude VHF audio streams, with slightly differing frequencies. When those streams intersect a target, a high amplitude difference-tone is generated in the body of the target. This low-frequency tone interferes with the target's synaptic refresh, effectively jamming the nervous system and rendering the target instantly unconscious. (Beat) It's a magic sleep gun."
— Kevyn Andreyasn (making a sales pitch to Sergeant Schlock

A nonlethal technological counterpart of Make Me Wanna Shout, this is one of the stock weapons of genre SF literature. A subtrope of The Paralyzer, it has very consistent traits:

In genre SF after the mid-1950s, anything called a stunner or stun gun without qualification probably has the performance traits and role of a sonic stunner. Earlier stunners in genre SF were Static Stun Guns. One functional difference is that sonic stunners are more likely to have stunner-sickness aftereffects.

In theory a device that works using beams of focused sound ought to allow for bank shots off any sufficiently hard, flat surface, including accidental self-stunning if the reflection hits the shooter. The problem is worsened by the fact that a right-angled reflector (like the corner of a room) will always reflect the beam back the way it came. In practice this never seems to happen.

This trope isn't as common in visual media, which favors more lethal and flashier weapons (and thus the visually more interesting Static Stun Gun). When you do see a sonic stunner in film or TV, it tends to be something of a subtle Shout-Out by writers making a point of their genre-SF roots.

Not to be confused with Doctor Who's sonic screwdriver, which is a tool rather than a weapon, or with the Statuesque Stunner, who is stunning in a more metaphorical sense.

Ross tries to subdue the Hulk with a pair of sonic cannons.

Ross tries to subdue the Hulk with a pair of sonic cannons.