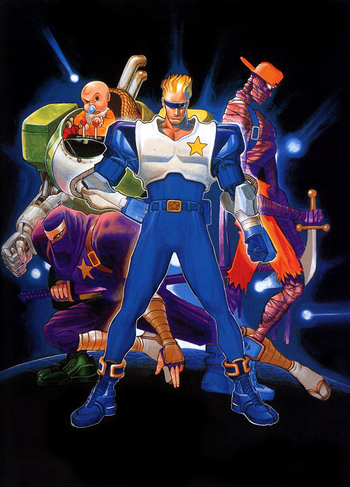 Captain Commando is an arcade Beat 'em Up created by Capcom in 1991, based on its at-the-time Series Mascot, the titular captain. It was one of many spiritual successors of Capcom's first Beat 'em Up, Final Fight. Among its unique features (back then) were the option for 3 simultaneous co-op play and the ability to control mecha suits scattered on the stages (similar to Mega Man X's Rider armors). The arcade game received a SNES port in '95 and a PlayStation one in '98.

The game deals with the Commando Team, a four-man group formed by the Captain himself, Sho (Ginzu the Ninja), Jennety (Mack the Knife) and Hoover (Baby Head). Together, they stand up against a futuristic world filled up with crime with the intent of cleaning it out, and are faced against a group of Super Criminals terrorizing Earth, commanded by an alien Evil Overlord known as Genocide (Scumocide).

And that was it. Good ol' Captain would fall into obscurity for a good couple years, until he was picked up to join the roster of the first Marvel vs. Capcom, which led to subsequent appareances in other Crossover games like Namco × Capcom and the Card Fighters series with SNK. Though unlike Capcom's other forgotten character, Strider Hiryu, he'd not receive any sequel out of this, but his game would later get a re-release through the Capcom Beat'Em Up Bundle

and the Capcom Arcade Stadium

, the former available for Playstation 4, Xbox One, Nintendo Switch, and Microsoft Windows worldwide and the latter being exclusive to the Nintendo Switch.

"Thank you for playing this game!"