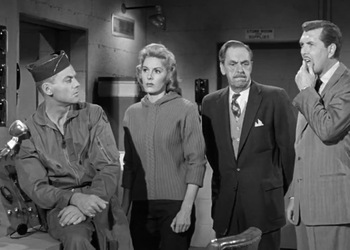 After a radioactive accident kills Dr. Karol Noymann (Carradine), his friend and colleague Dr. Adam Penner (Tonge), starts the initiative to stop nuclear experimentation. Later, Noymann's body is possessed by an invisible alien and goes to Penner's house to warn him that if humanity does not stop nuclear testing, they will destroy the earth. At first no one believes him, but the invaders start to make public announcements and Major Bruce Jay (Agar) recruits Penner, as well as his daughter Phyllis (Byron) and her boyfriend Dr. John Lamont (Hutton), to find a way to kill the monsters.

A minor cult classic, Invisible Invaders is mostly known today for being arguably the Trope Maker of the Zombie Apocalypse genre, almost a decade before Night of the Living Dead (1968).