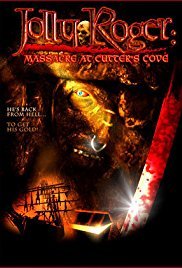 Some things should stay lost at sea.
Advertisement:

Jolly Roger: Massacre at Cutter's Cove is a 2005 Slasher Movie from The Asylum. It concerns a ruthless pirate being awakened from the dead by some college students.