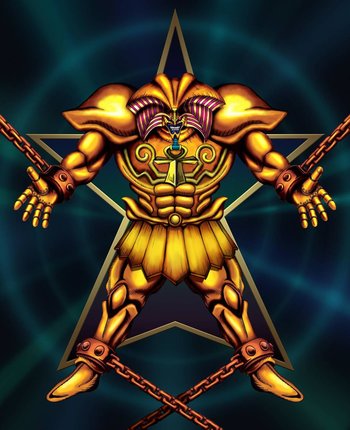 Guess what happens when it gets freed...
Keller: And you didn't think that the United States military might need to know that you're keeping a hostile alien robot frozen in the basement?
Tom Banachek: Until these events we had no credible threats to national security.
Keller: Well, you got one now!
— Transformers
Advertisement:

This trope covers the idea of (usually) "lesser" beings capturing an alien, a god, an angel, etc. for some typically nefarious purpose. Obviously, some form of powerful magic or advanced technology will be needed to pull this off, making it a more common plot in Fantasy or Speculative Fiction.

It's also a standard "The Men in Black" plot, in which the government or other secret organization has miraculously captured a powerful entity and are extracting its knowledge and power usually through various unpleasant means. Extra MIB points if this is occurring at Area 51.

If the being came with advanced technology, they've likely been reverse-engineering it for themselves. Or maybe they've secretly put said technology on the open market, claiming that they invented it. If a common modern day technology is revealed to have actually been a direct result of all this, then E.T. Gave Us Wi-Fi.

Magical entities (more often than alien ones) have a habit of breaking out and slaughtering their captors.

Naturally, should the entity's species find out about this, they're gonna be pissed, leading to the threat of The End of the World as We Know It. This may be justified, if said race was going to destroy us anyway. Oh, and Heaven help you if the captured entity is just a baby, and Mom comes calling. But even without outside help, in most cases the captured being probably won't be a prisoner for very long. So you are well advised to stand clear.