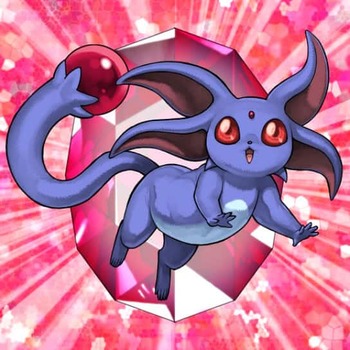 Tail and background gem optional.
"What— 'The Carbuncle ate itself?!' What does that mean?!"
—Dan Avidan, Game Grumps, Sonic Shuffle
Advertisement:

The carbuncle is a creature described in Jorge Luis Borges's Book of Imaginary Beings. Allegedly sighted in 16th century South America, the carbuncle is described as a small animal with a jewel or small mirror on its forehead. Depictions vary between quadrupedal and bipedal, and is most often depicted as a mammal, though reptilian carbuncles are not uncommon. The gem in question is almost always red, often a ruby or garnet, since the name of the creature is derived from a word for red gemstones, which were once thought to have magical powers. That said, variants with other gem stones are not unheard of. Carbuncles are said to bring great wealth and fame, and in some works, the gem may be a source of magical power.

Although originally described as rodent-like and having shells, most modern works depict them resembling a cat, rabbit, fox, or a mix of the three. They often show up in fantasy media, but are particularly common in Eastern RPGs, especially Mons Series. Expect them to be an adorable mascot character. Occasionally they will be treated as a rare Metal Slime style of monster, alluding to the association with wealth. Note that a creature doesn't need to explicitly be called a carbuncle to be an example, as long as it still fits all the other criteria. The gem must be an organic part of the creature, animals wearing jeweled accessories on their head do not count.