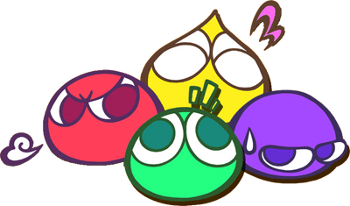 "It's fast, it's furious, and it's puzzlingly addictive!"
— Puyo Pop Fever, EU back cover
Advertisement:

Puyo Puyo, known as Puyo Pop in English for a number of years, is a series of competitive Falling Block puzzle games originally created by Compile as a Spin-Off series of Madou Monogatari, currently owned by Sega. The object of the game is to flood your opponent's board with Nuisance Puyo by making chains with several multi-colored Puyo, which explode when four of the same color are connected. Despite its relative obscurity in the west, due in no small part to a history of not being localized, it is arguably one of the more influential puzzle series; its competition-based gameplay and colorful stable of characters were groundbreaking in the early '90s and inspired a wide variety of competitors.

Puyo Puyo was created to counter the legions of aesthetically-bland Tetris imitators of the late '80s and very early '90s. To that end, Compile incorporated characters from Madou Monogatari 1-2-3, an earlier first-person RPG that sees Action Girl Arle Nadja battle a variety of colorful monsters. Though the original MSX and Famicom Disk System Puyo Puyo games quietly came and went, the arcade version became a hit and its sequel became nothing short of a Japanese arcade phenomenon. How many other puzzle games can boast that they have held televised tournaments?

Unfortunately, despite (or, perhaps, due to) Puyo Puyo's success, Compile very quickly racked up a staggering amount of debt that they were unable to repay. As part of a restructure attempt in 1998, ownership of the series transferred to Sega. Compile continued to create Puyo Puyo titles for two more years before leaving the series forever. Sega, utilizing their Sonic Team banner, produces Puyo Puyo games to this day.

In addition to the "major" games, there are more than a dozen spinoffs. They are listed below:

As you might already know, Puyo Puyo came to western countries in the form of Dolled Up Installments. Said installments, as well as other non-Compile/Sega-developed Puyo games, include:
Other Games

In addition to the above games, the franchise has also heralded several Drama CDs and Light Novels, and even a stage play.
Other Media

Satan disguises himself by wearing a simple mask and changing his name to Masked Satan. Arle has no problem seeing through his poor disguise.

Satan disguises himself by wearing a simple mask and changing his name to Masked Satan. Arle has no problem seeing through his poor disguise.