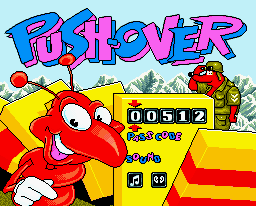 Push-Over is a Puzzle Game developed by Red Rat Software and published by Ocean in 1992. Originally for the Amiga, it was also ported to MS-DOS and the SNES. The game is based on the beloved pastime of setting up dominoes in a row and knocking them over, except now, half the dominoes have magical effects added to them: dominoes may do strange things like vanishing, exploding, or falling upward when struck. The aim of the game is to set up the dominoes in the proper order so that they all fall over.

The plot of the game features an old mascot of the British potato-chip snack "Quavers", named Colin Curly. One day, he's dancing around and he trips in mid-air, dropping ten packets of quavers from his pocket and down an anthole. A friendly ant decides to help him, but quickly finds that not only is the anthole a portal through space and time, one hundred doors stand in his way which can only be opened by completing domino puzzles. (Yeah...)

Due to clever puzzles and surprisingly

memorable music, it's a recommended playthrough for any puzzle enthusiasts. The DOS version works fine on DOSBox if you happen to find it anywhere, but the game has also seen several fan-remakes.