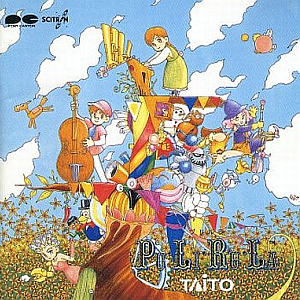 Here is a wonderland called "Radishland". In each town, under a keeper's control, the time flow was correctly kept with a time key. But, a bad man appeared and stole the time key to stop the time flow. The towns were attacked one by one, the time flow was stopped and they received damage. An old man was impressed with a sense of danger and he called Zac and Mel. And he entrusted them with his invented magic stick in order to defend their town.
—Opening Narration
Advertisement:

Pu·Li·Ru·La is a surreal arcade beat 'em up created by Taito, first released in 1991. It was ported to PlayStation and Sega Saturn in 1997, and the game was included in Taito Memories for PlayStation 2 and Taito Legends for PlayStation 2, Xbox, and Windows.

The story of Pu·Li·Ru·La revolves around the magical kingdom of Radishland, where the flux of time is kept in check to ensure its everlasting peace. When a sinister figure steals the "Time Key" that controls the flow of time, the landscapes of the kingdom are distorted beyond recognition. A noble old man gives magic rods to two children, Zac and Mel, and subsequently tasks them with recovering the keys to restore the kingdom back to its normal state. They accomplish this by running around now wacky places of Radishland, encountering enemies packed with Funny Animal, Mind Screw, Outside-Genre Foe, and many others.