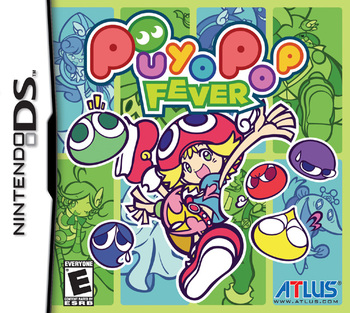 Puyo Puyo Fever, localized as Puyo Pop Fever, is a 2003 entry in the Puyo Puyo series of competitive Falling Blocks games; it is the first major arcade/console Puyo Puyo game developed under Sega, the final Puyo Puyo game released for arcades outside of spin-offs, and, with its Sega Dreamcast port, the final first-party game for a Sega console. Initially released for the Sega NAOMI arcade hardware, Fever represents both a gameplay Retool and an aesthetic Soft Reboot.

On the gameplay front, the game no longer strictly drops pairs of Puyos, instead giving players sets of two, three, or four Puyos at a time to drop based on a character-specific sequence known as a "dropset". Instead of the player receiving one chance to offset garbage waiting for them, garbage will not fall until the player fails to clear any Puyo by dropping a pair. Finally there's the titular Fever mode, activated through offsetting Garbage Puyos enough times, that challenges the player to quickly clear preset formations of Puyo in hopes of neutralizing the garbage waiting for them and potentially turning the tables on the opponent. All of these changes combine to make a game that has a much greater emphasis on Victory by Endurance than most of its predecessors.

Fever also introduces an almost entirely new set of characters. Ms. Accord, teacher at Primp Town's magic school, has lost her flying cane; she tasks her class with finding the cane and promises a reward if they do so. Bright-eyed magician Amitie, as well as her haughty rival Raffina (known as Raffine here), battle their classmates and other strange creatures while searching for the cane.

Following Fever's final European release, there was a gap of internationally-released Puyo Puyo games that lasted more than a decade; outside of direct, often untranslated ports of older games, the next major game to be localized and released outside of Asia was Puyo Puyo Tetris.