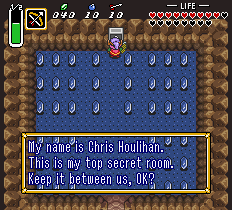 "It's a secret to everybody."
"You are a stupid, square-headed bald git, aren't you? And you, I'm pointing at you, I'm pointing at you, but I'm not actually addressing you. I'm addressing the one prat in the whole country who's bothered to get hold of this recording, turn it 'round and actually work out the rubbish that I'm saying. What a poor, sad life he's got!"
— Backmasked message played in Red Dwarf, "Backwards"

Originally, "Easter  Congratulations! You found an Easter egg on this page! Eggs" was the term for little bits of stuff programmers left behind in the software. They're secrets, intended to tickle the fancy of those who discover them. Programs far too numerous to mention have included Easter eggs — everything from Microsoft Office to Grand Theft Auto: San Andreas.

But Easter Eggs aren't just found in software any more: the term is also used for a variety of hidden content, such as Hidden Tracks on albums and unadvertised DVD Bonus Content, and at one time, for people who sat through the credits (now referred to as The Stinger).

The first Easter Eggs were inserted by programmers for companies whose policy forbade them from receiving individual credit for their work. The earliest Easter Eggs were mostly credits pages, possibly to allow the programmers themselves to prove authorship to friends. For security reasons (and concerns about malicious programmers inserting undocumented and destructive code), most companies don't allow Easter Eggs to appear in their software anymore, but as individual programmers now receive full credit for their work, it's a moot point.note This hasn't stopped programmers from adding them.note Sometimes with negative results.

And…
…the problem of software bugs that can come with black box code.

An article on why Easter Eggs exist (focusing on Magic: The Gathering, but applicable to all games) is available here.

In Video Games, Easter Eggs can sometimes be found with a Rocket Jump or a well-timed Double Jump. You can also find some if you use the bunny hop trick. . See? Here's an example of one! Why did you click this anyway? Maybe you should look at the above quote…

Subtropes include Bilingual Bonus (when the audience member must know a language other than the main one of the work to get the extra information) and Freeze-Frame Bonus (an Easter Egg that only appears onscreen for a very brief moment), subtler forms of Foreshadowing (when you go back and discover that minor events or Freeze-Frame Bonus moments tie into events to come), and What the Hell, Player? (an Easter Egg you get for doing something odd in a game).

For many, part of the fun of Easter Eggs is discovering them on one's own, so if you're one of those, beware of spoilers.

See also Shout Outs, which are basically Easter Eggs that are very easy to find.