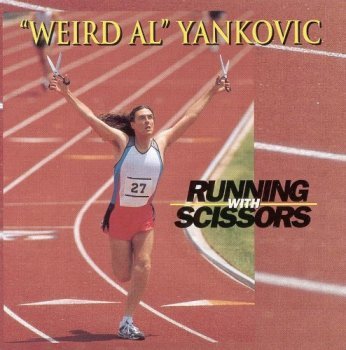 "Oh, this is a story 'bout a guy named Al..."
A long, long time ago
In a galaxy far away
Naboo was under an attack
And I thought me and Qui-Gon Jinn
Could talk the federation into
Maybe cutting them a little slack
—"The Saga Begins"
Advertisement:

Running with Scissors is the tenth studio album by "Weird Al" Yankovic, which was released in 1999. It was the first album to debut his post-LASIK surgery, glasses-free appearance. It was also Al's first album on Volcano Entertainment, which bought out Al's prior label Scotti Bros. Records.

It's all about the TV Tropes! (Yeah!)

The narrator cuts off all four of a man's limbs after being unable to understand sarcasm.

The narrator cuts off all four of a man's limbs after being unable to understand sarcasm.