Dan: Tiny has added a bit of choreography to his usual presentation.
Dick: There is nothing usual about Tiny Tim's presentation!
— Rowan and Martin's Laugh-In 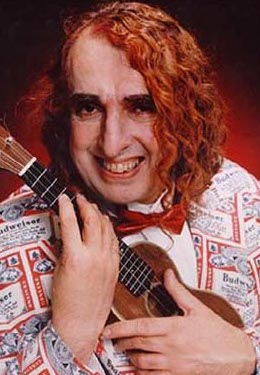 No not that one, I mean the stage name of Herbert Buckingham Khaury (April 12, 1932 – November 30, 1996), known for playing the ukelele and singing in a falsetto, and for his stringy hair and rather... interesting appearance.

He's generally only remembered now for his act of singing "Tiptoe Through The Tulips" in falsetto with the ukelele, and maybe for appearing at various clubs and shows in the fifties and sixties, as well as Rowan and Martin's Laugh-In several times as a featured guest. And one of his songs being featured in the first episode of Spongebob Squarepants. (He was also the only celebrity ever to get married on The Tonight Show With Johnny Carson.) Despite appearances, he was actually very well educated, and had a deep interest in musical history.

In fact, he had a rather pleasant baritone voice when needed, and released several records displaying a larger range, both vocally and in taste. In later years he worked intermittently, producing small records and occasional cameos. He had a heart attack in September 1996 at a ukelele festival, and died of another heart attack two months later.

Irwin Chusid has re-evaluated him in his book "Songs In The Key Of Z: The Curious Universe Of Outsider Music" as an early Outsider Music artist. In fact Tiny Tim managed to achieve what no other outsider musician has quite accomplished: mainstream notablity and a hit in the charts!

Tropes That Apply To This Artist: