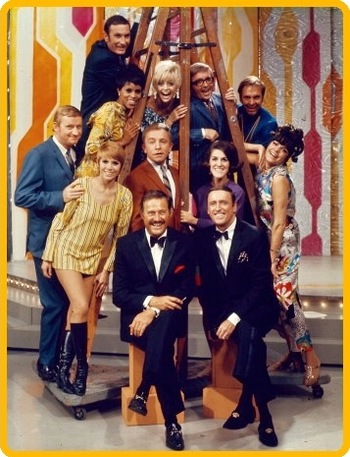 An iconic, anarchic hour-long Sketch Comedy series broadcast on NBC from 1968 to 1973 (after a one-off Pilot special aired in September of 1967). Created by George Schlatter, it broke new ground in American TV comedy with its rapid-fire jokes, outrageous characters and — for the time — utterly insane and over-the-top humor. The show's ostensible hosts were the urbane Dan Rowan and the somewhat dim Dick Martin, but this tuxedo-clad pair were frequently outshone by the platoon of seeming lunatics who made up the rest of the cast.

The show is best known today for the future stars whose careers it launched — Goldie Hawn, Lily Tomlin, Tiny Tim, Henry Gibson, Ruth Buzzi, Arte Johnson, Pat Paulsen, and Jo Anne Worley among others — and the incredible comic moments it managed to pull off (such as then-presidential-candidate Richard Nixon asking America to "sock it to him"). Until the birth of Saturday Night Live several years later, Laugh-In was the touchstone of modern American humor. (SNL emulated it, in some ways — unsurprisingly, because many Laugh-In writers later worked on SNL, including the later show's creator and executive producer, Lorne Michaels.) It was possibly the single largest source of Running Gags, Catch Phrases and other pop culture contributions during the middle of the 20th century, and developed during its surprisingly brief run an utterly unique and frenetically subversive style that carried them directly into the subconscious of the viewer. Because of its wild and unpredictable yet intelligent style, it was also often very successful at getting surprisingly risque material (for the era) on the air — usually by setting up apparently-innocent situations where the viewer's mind would fill in the blanks with suitably dirty punchlines and speculations of their own.

Regular features of the show included Rowan and Martin's opening "monologue", Gladys and Tyrone the Dirty Old Man on the park bench, the "cocktail party", the not-quite adventures of the Farkel family, "Laugh-In News" and the end-of-episode "joke wall". (The joke wall started to be used intermittently in season six, with some episodes not having joke wall at all.) In addition to the videotaped studio sketches, there were also a large number of filmed bits, most of them running gags, including most famously Judy Carne and Goldie Hawn go-go dancing, and the raincoated man on his tricycle. Every episode had a celebrity Special Guest who participated in the anarchic goings-on, usually with gleeful good humor. Certain stars, like Tiny Tim, were particular favorites and were brought back episode after episode until they were almost members of the main cast themselves. Video clips of previous guest stars would also frequently show up on later shows as punchlines, setups or simple Reaction Shots.

Part of the show's charm was due to Schlatter's tendency not to do retakes, leaving bungles, bloopers and cast crack-ups in place for broadcast. (In fact, he often deliberately provoked Goldie Hawn into fits of giggles on-camera just so he could film and broadcast her laughing.) This gave the impression of a show that was often completely out of control and on which almost anything could happen. The often psychedelic set design just added to it, although Laugh-In never did any kind of overt hard drug humor (although most episodes had a coy marijuana one-liner or two).

George Schlatter attempted to recreate the success of Laugh-In for ABC by cloning it into a show called Turn-On. However, the first episode of Turn-On was met with so many complaints about its quality that it was either banned from airing, cancelled fifteen minutes into the episode (The Other Wiki says the last sketch that aired was one where a woman violently shakes a vending machine that dispenses birth control pills), or aired in full and then never again. (Viewers also complained about flashing animations and rapid-fire visual switching — which some of Sesame Street's animations

normalized and made commonplace a few months later.)

Before the 1970's were over, Schlatter would try once again with a proper revival of Laugh-In. It too, failed, but even so, it proved that Schlatter's eye for comedic talent had in no way diminished — the cast he assembled for the revival included several performers who later went on to stardom or superstardom, including a then-unknown Robin Williams.

Laugh-In's influence is extremely obvious in such shows as Sesame Street, The Muppet Show, You Can't Do That on Television, and the aforementioned Saturday Night Live.

In 1969, Brown & Bigelow made a deck of Laugh-In playing cards

, and NBC had a short-lived daytime Panel Game, Letters to Laugh-In. There were also a syndicated Newspaper Comic based on the show and a Hasbro Board Game called "Squeeze Your Bippy".