The Devil Is a Loser 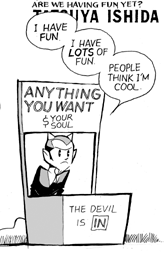 Keep telling yourself that.
Mephisto: If you so desired, I could return your mother to you, alive and well. I could even mend your relationship with your brother— make your family whole again. All I would require is— [finds Ebony pressed against his neck] Gyark!
Dante: I'm not really interested in mending fences with my brother, so here's my counteroffer: You give me a job that can pay my electric bill for the year, and I'll leave you here with your head attached to your body.
Mephisto: ...Actually, there's a fiend called Blackheart who has caused me trouble to no end.
Dante: Done. But I'm charging you triple because you're such a tool.
— Ultimate Marvel vs. Capcom 3
Advertisement:

Some stories portray the devil as a weak and ineffectual (if unrelentingly evil) guy. He may be more worried about getting his Wood Elf character to level 70 or catching the latest episode of Avatar and the Airbending Fellowship of Vampire Slayers than punishing the damned or tempting mortals, or perhaps he's unattractive and lives in God's basement. Perhaps he gets outsmarted every time he tries to make a deal with a mortal. Maybe he's plagued by Daddy Issues (being the original rebel and all).

Naturally, he's no match at all for the forces of heaven. Jesus doesn't need to know kung fu to humiliate him and is in any case much cooler than him. His former fellows among the angels can give him wedgies at will. A Good Shepherd can talk him into submission. Heck, even a mortal guy with a cross could drive him back.

Some works will use Evil Is Petty to show this. It's pretty hard to think the devil is cool when he spends most of his time writing rude words in the public toilet and prank-calling the church.

It's most common in medieval and more traditional Christian portrayals to show him as a thug, dangerous but also easy to fool and really only waiting for someone stupid enough to sin. If he's intelligent, it's only something he puts on when it's convenient and discards at the first possibility, since his hatred for God extends to hatred for the wisdom He provides. The Inverted Trope to this, where Satan is a stylish, seductive badass, is a modern invention largely derived from Doctor Faustus.

For other non-threatening spirits that personify death, see Don't Fear the Reaper and Death Is a Loser.

In "Devil Can't Write No Love Song", a man tries selling his soul for a song that will make him famous. When Satan tries, he fails spectacularly.

In "Devil Can't Write No Love Song", a man tries selling his soul for a song that will make him famous. When Satan tries, he fails spectacularly.