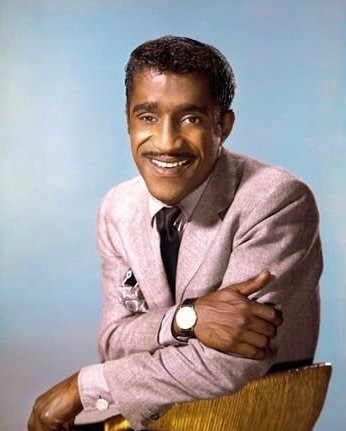 "What have I got? No looks, no money, no education. Just talent."
Advertisement:

Samuel George "Sammy" Davis Jr. (December 8, 1925 – May 16, 1990) can lay claim to being one of the most successful "triple-threat" entertainers in American history. As a singer, dancer, comedian, actor, celebrity impersonator, photographer, and member of the Rat Pack, Davis entertained audiences on stage, screen, and disc for more than four decades, and is still fondly remembered by legions of fans.

Born to vaudeville dancers Sammy Davis Sr. and Elvera "Baby" Sanchez in Harlem, he learned to be a performer from a very early age, and performed with his father and uncle in the Will Mastin Trio. Davis also faced racism from a very early age, especially when he enlisted in the U.S. Army during World War II. He was eventually assigned to a Special Services unit that performed shows for the troops, and found that he faced less prejudice on stage.

After being discharged, Davis released a series of acclaimed albums, which included hits like "Love Me or Leave Me", "Something's Gotta Give", "What Kind of Fool Am I", and "I've Gotta Be Me" among others. This culminated in him being brought on board by Frank Sinatra to be a part of the Rat Pack in 1959. The group would go on to be one of the defining groups of the '60s, via their stage performances and collaborative appearances in films like Ocean's Eleven and Robin and the Seven Hoods. This would also effectively end segregation in Las Vegas, as Sinatra refused to perform anywhere Sammy wasn't welcome or blacks couldn't come to watch the show. During this period, Davis was performing with the Pack, starring in Broadway productions, recording, shooting his own daytime talk show and appearing in several variety specials. This multidisciplinary career lasted through the '70s and early '80s, punctuated by a upsurge in interest when his version of "The Candy Man" (the opening theme to Willy Wonka & the Chocolate Factory) became a smash hit and revitalized his work.

Aside from his film and musical work, Davis appeared as a notable guest on several television shows and TV movies, including cameos on All in the Family, Batman (1966), Charlie's Angels, The Cosby Show, Rowan and Martin's Laugh-In and Sanford among others. Davis passed away from throat cancer at the age of 64 on May 16, 1990, the same day as another beloved performer — Jim Henson.

Tropes embodied by Davis and his work include:

References in other works:

The Head Ratte (voiced by Sammy Davis Jr.) sings about how rats should be as vile and mean as possible.

Example of:
You Dirty Rat!

The Head Ratte (voiced by Sammy Davis Jr.) sings about how rats should be as vile and mean as possible.