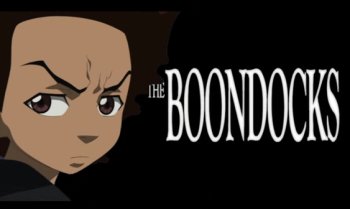 The Boondocks is an animated comedy series produced by Sony Pictures Television, originally running intermittently for four seasons from 2005 to 2014 on [adult swim], with an upcoming reboot scheduled for release in 2020 on HBO Max. It was adapted from the newspaper comic strip of the same name that was created by Aaron McGruder, who is also the executive producer and main writer for this show.

Like the comic strip, this series focused on the lives of the Freemans, a black family from inner city Chicago who move into the mostly white suburb of Woodcrest, Maryland. The main protagonist and narrator is Huey Freeman (Regina King), a preteen radical leftist activist who despite his extreme politics, is usually depicted as the lone voice of reason. His younger brother Riley Freeman (also King) is a troublemaking delinquent who idolizes gangsta rappers. Their grandfather Robert Freeman (John Witherspoon) is a Grumpy Old Man who is quite likely too senile for his own good, and can usually be found chasing younger women.

Other important characters include Uncle Ruckus (Gary Anthony Williams), an old black man who has a deep hatred of his own race. Also returning is Tom Dubois (Cedric Yarbrough), a very friendly yet hapless black lawyer with a white wife Sarah (Jill Talley) and a mixed daughter Jazmine (Gabby Soleil). Compared to the comic strip, there's a considerably larger cast of strange and colorful characters, both recurring and one-time.

Like the comic strip, this series satirizes many issues about African Americans and the United States in general, but takes a different approach to it. Rather than just overt social commentary, the series's brand of humor is far more over-the-top, with the Freemans constantly getting into wacky misadventures with weird people, along with the obligatory martial arts action scene.

The first three seasons of the series (2005-2010) were made with Aaron McGruder's direct involvement. However, the fourth season (2014) was not, as he was busy working on Black Jesus at the time. After Season 4 was released to overwhelmingly negative reception from fans and critics, the show was either cancelled or put on indefinite hiatus. As such, its future was uncertain until 2019.

In the interim before and after Season 4, there were a couple (failed) proposals to create spin-off media based on The Boondocks. First, there were aborted plans to give Uncle Ruckus a live-action feature film

via Kickstarter; however, the project failed to receive enough funding and was promptly scrapped. Later after Season 4 ended, Aaron McGruder expressed an interest in making a video game adaptation

; however, this post was abruptly deleted and there have been no followup announcements about it, making it very unlikely to happen as well.

satirizing the current state of American politics and pop culture. Just a few months later in June 2019, it was officially announced

that a Continuity Reboot of the animated series was in development at Sony Pictures Animation and will premiere in 2020 on the HBO Max streaming service, with McGruder also returning to produce this new version of the show.

It has a Best Episode Crowner

. Not to be confused with The Boondock Saints.

"It's All Right to Cross-Dress for Christ" is a clear parody of "Time Warp" from Rocky Horror Picture Show, the main singer Winston Jerome a parody of Tyler Perry.

"It's All Right to Cross-Dress for Christ" is a clear parody of "Time Warp" from Rocky Horror Picture Show, the main singer Winston Jerome a parody of Tyler Perry.