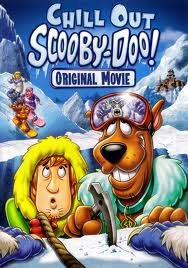 An Original Movie!
Chill Out, Scooby-Doo! is the eleventh Scooby-Doo Direct to Video film produced by Warner Bros. Animation and the final Scooby-Doo project involving Joseph Barbera before his death.
Advertisement:

The gang tries taking a vacation to Paris, France, but Scooby and Shaggy accidentally get on the wrong plane. Still thinking they’re going to Paris, Alphonse LaFleur, a famous French hunter and trapper, plans on capturing the Abominable Snowman, and using Shaggy and Scooby as bait. After locking them up with his equipment, LaFleur drops Shaggy and Scooby off the plane. Realizing they're not going to Paris, Shaggy briefly manages a phone call to Fred before his phone dies.

Fred manages to pinpoint their location with his new phone's GPS, and they head off to the Himalayas. Meanwhile, Shaggy and Scooby land near a small village where they find two men, Professor Jeffries and Pembra. Scooby and Shaggy learn that the only way to call their friends is from a weather station at the top of the mountain, and Jeffries and Pembra agree to accompany them on their mission. And so, they set out to climb the mountain with an Abominable Snowman on the loose.